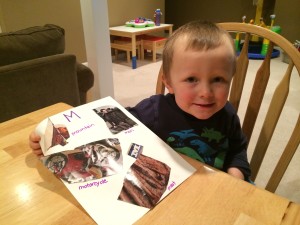 My middle son loves to cut and paste things.  ANY things!  He’s also learning his letters and letter sounds so one day I decided to pair his love of cutting and gluing and my desire for him to learn letter sounds.

I gathered 5 or 6 old magazines and took out some paper.  I wrote the letter “M” on the top of the page.  I chose this letter because his name starts with “M” and I wanted to begin with something familiar.  I asked him what letter it was and what sound it made.  We practiced making the sound together.
Then we looked through magazines trying to find things that began with the letter “M.”  He surprised me because he actually found a big letter “M” in the magazine and started cutting it out.  I hadn’t thought of that but it was a great idea so he cut out “M” and any words starting with “M.”
Then he glued them onto the page and I’d write the word next to the picture.  We periodically stopped to read each of the pictures as well.  When we’d find something that we thought started with “M” we’d say the thing several times and I’d ask, “Does that sounds like /m/?” 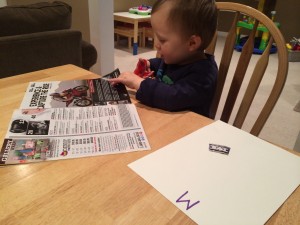 My son had a lot of fun and he actually said to me at the end, “Let’s make a book and do more letters!”  What a great idea!
This entry was posted in Reading With Your Children and tagged Letters, Phonics. Bookmark the permalink.